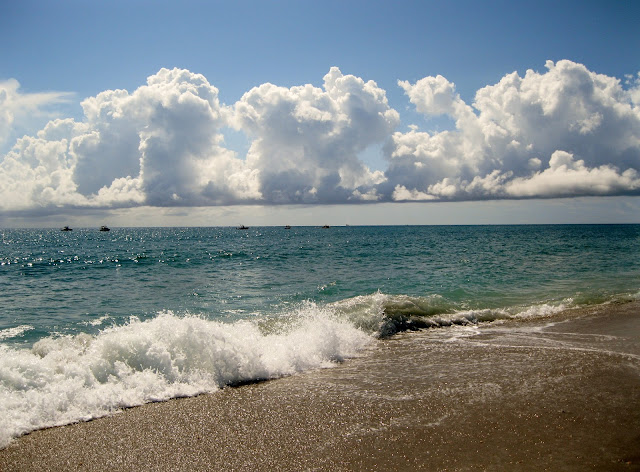 That is what I am doing right now - Dreaming.  I am currently in West Palm Beach visiting my son Matthew, Angie (his fiance), and my grandson Julian Carter.  There is much excitement, planning, and activity going on - for in one week we are having a wedding.  And it's going to be beautiful! (pictures to come, but for now just a few photos of West Palm & Matthew, Angie, & Julian.)

Now, back to the reason for the title -Dare to Dream-. I've always wanted to write a cookbook; and now that I am in West Palm visiting with Matthew (he is a Chef), talking about recipes, food, etc. - my mind is going a mile a minute with ideas and  write/create a cookbook with Matthew. But, for now it is just a dream; but, dreams do come true.

Here's to Dreaming and Making them come True!

It's Friday and I know everyone is
ready for the
weekend!

Here in Atlanta it's hot, humid, and this summer
experiencing crazy weather.   With that
said I wanted to bring a little sunch9ine into your weekend
- so let's talk ice cream.
**(just an excuse to use my ice cream machine)

When yo think of ice cream - you (well, me) definitely
think of summer
Just Happy!
So my friends to start your weekend; here is a little happy for you
to try:
Coconut Pineapple Ice Cream
Sprinkled with toasted Coconut
In a heavy 3-quart saucepan, combine the half & half, cream sugar, crushed pineapple and the coconut extract.  Bring to a simmer over medium heat. Stir often; don't want it to scorch.
Remove from the heat when the first bubbles begin to form around the edge of the pan: DO NOT let the mixture boil.  Let mixture cool slightly.  Place mixture in an airtight container; refrigerate overnight.
Pour mixture into the canister of the 4 to 6-quart ice cream freezer (if your ice cream freezer is smaller; divided the mixture).  Freeze according to manufacturer's directions.  The ice cream will be soft.  If you would like the ice cream to be firmer; place in the freezer for several hours or overnight.  Garnish with toasted flaked coconut.
Have a Great Weekend!!!!

For the Love of Gardening 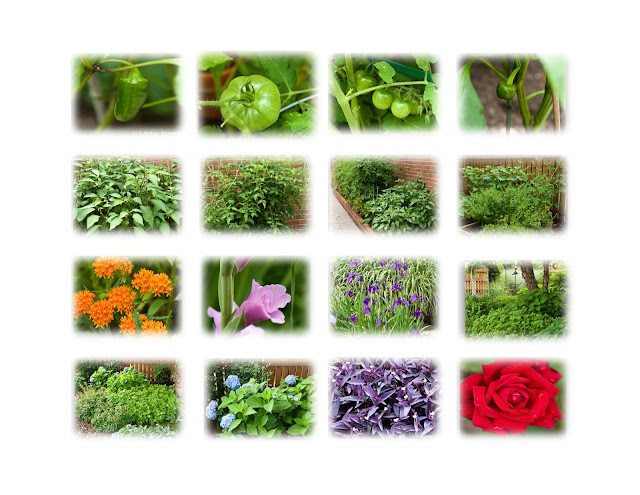 I am here to announce that I Love Gardening - the being outside, the working with the soil, composting, growing vegetables from seed.  It gives me a feeling of accomplishment.  It also reminds me of my grandfather - who could grow anything.

This season I am just in awe of my garden - mostly my vegetable garden (my flowers are doing great as well, but my vegetables); I've never seen them so hearty.  Some years have been better than others and there have always been one or two vegetables that have given a good yield - tomatoes and jalapenos.

But, this year - this year is over-the-top.  I have tomatoes, green peppers, jalapenos, and herbs that are just out of control - I Love It!  And something that I have planted year after year; and it dies year after year - cucumbers.

People I have cucumbers and not just ordinary cucumbers.
A wonderful friend informed me that the variety is called 'lemon cucumber'.  They are
are coming in like gangbusters.  Because of this abundance
I have come up with a few recipes that use this
wonderful fruit and I hope you will enjoy.

(oh, something else I have learned - a cucumber by definition is a fruit.
This from a Bontonist - A fruit is the part of the plant that developes
from a flower.  It's also the section of the plant that contains the seeds.)
You learn something new every day. 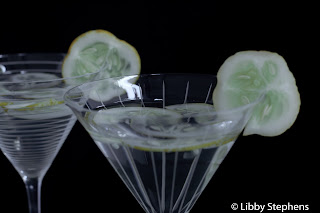 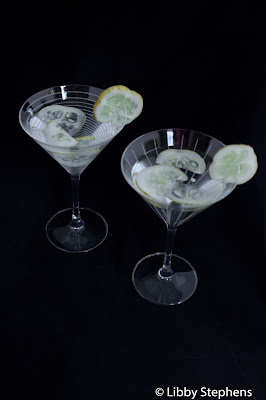 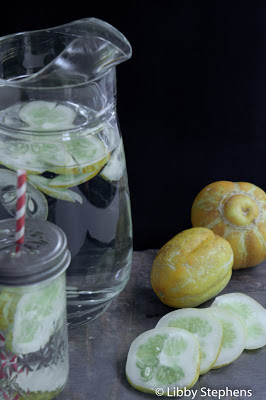 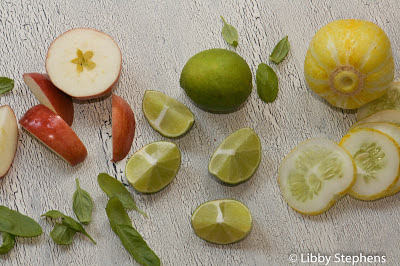 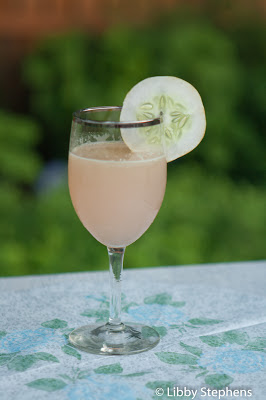 Starting with the basil, juice everything into a glass.
** If you do not have a juicer she suggests - chop all the ingredients and pop them into a
powerful blender with 1/2 cup of water - then pass the mixture through a fine-mesh strainer
into a glass. Stir and drink immediately. 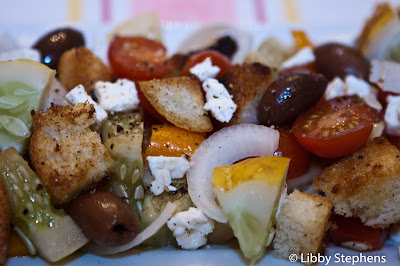 Heat 1/4 cup olive oil in a large sate pan until hot.  Add the bread and sprinkle with salt
and pepper; cook over low to medium heat, tossing frequently, for about 5 to 10 minutes
or until nicely browned.  Set aside.

Place the cucumber, tomatoes, bell peppers, and onion in a large bowl and toss together.

Add the feta, olives, and bread to the vegetables in the bowl, add the vinaigrette, and toss lightly.
Let sit for 30 minutes to allow the flavors to meld together.  Season to taste.  Serve at room
temperature. 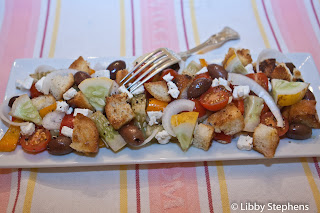 Vinaigrette
Place all the above ingredients in a small bowl and whisk together.  Whisking constantly,
slowly add the 1/2 cup of olive oil to make an emulsion.

There you have it - 5 different ways to have cucumbers.  I really hope you try these recipes.


Here's Wishing you a Happy Monday! 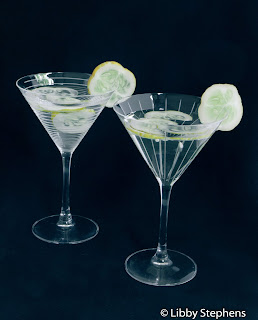 What I Discovered This Week 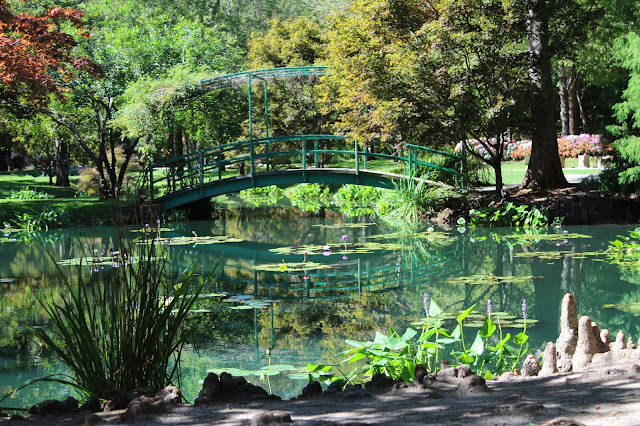 Libby
About me: I am a wife, a mother of 3 grown sons, mother-in-law to 3 daughters, grandmother to 5 wonderful grandkids. I am not a complicated person, but I do love to do many things: create in the kitchen, food photography, paint in oils, acrylic, & watercolors, printmaking, playing music (guitar & piano) and I am currently teaching myself banjo. I love the outdoors - gardening, hiking, biking, camping. Aside from all the things I love to do - most of all - I love the Lord I love my Husband (more than I could ever express) I love my parents, kids, and grand kids with all my heart. Let's see, I think that covers everything. Thanks for reading!